Tom was much more than my oldest brother; he was my hero, father figure and my best friend who loved me unconditionally.  No one is perfect though and I remember very well the way we hated each other until he graduated high school and went into the Navy Seabees.  That all changed when he came home from basic training though, our friendship began then.

Tom served 6 years active duty doing three tours in Viet Nam then finished out his military time of 20 years in the Navy Seabee Reserves.  He loved the Seabees.

When I started my over the road driving career, Tom was jealous a little; he wanted to be a truck driver too, but he had four kids and a wife and felt that he should stay home with them.  He had a good job as a tree trimmer in California though for many years.  He moved back to our home state of Wisconsin for some years and then moved his family down to Missouri where the rest of the family lived.  Not able to find work and with the kids being older, he decided to become a trucker in the early 1990’s.  Tom took to trucking like a duck to water.  He drove until early 2009 when back pain put him out of the seat.  He was at the VA hospital in Ft. Leavenworth Kansas often for the pain that had moved to his shoulders too.

In June 2009, after the death of his oldest son, Tom started having some serious medical issues and was rushed to the hospital in Kansas City.  It was found there that he had cancer and had it for a long time.   Tom died six weeks later and was buried with full military honor at Ft. Leavenworth National Cemetery.

Tom’s dying left a huge hole in my life.  Tom never failed to love me, be proud of me, encourage me in all of my pursuits outside of the truck or in it and was always there when loneliness set in to talk to.  God and the Lady could have never given me a better big brother or best friend.   Though I miss him greatly and sometimes the sorrow of his being gone overwhelms me, I hold in my heart that someday, somewhere, in another life, we will find each other again and I will have my big brother back. 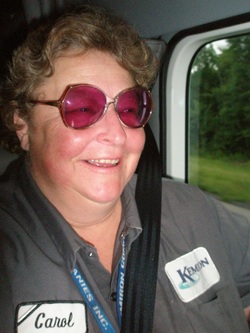 Truck driving as a career was not in Carol H’s mind when she was in high
school.  The girl whose father was a Yale graduate and whose mother was a
graduate of Duke University instead was on the college bound fast track.  Then
fate intervened.  Carol got a job driving an ice cream truck.  She loved driving
around neighborhoods and meeting new people and seeing new places even though it was in her hometown.

Carol started college, but the lure of the open road drew her and in 1970,
she climbed into her first semi, a 1960 Auto Car.  “I was only 19,” she said, “I
wasn’t legal to drive, but we could get away with it back then.  The truck had
bare metal inside, a crank seat instead of air ride.  It was nothing like what
we drive now.”

Turning 21 in 1973 gave Carol an opportunity to get over the road.  A union company was hiring and Carol and three others applied for jobs as drivers.  There were no schools to learn how to drive back then.  “I was hired, but at the bottom of the driver board.  I had to learn by the seat of my pants and by observing.  Because of it being a team operation and me being on the bottom of the board, I had probably 40 different drivers I teamed with,” she relates.

It sounds easy, but it was not.  There were very few women drivers in trucking in 1973 and even fewer in union driving positions.  “Many of the drivers went out on an unsanctioned strike after I was hired, but not right away,” Carol said, “I didn’t even know it at the time, I wasn‘t notified.  The main issue was the driver’s wives not wanting their husbands to run with a
woman.  One wife even chased me around the plant one night until some of the other drivers made her leave.  It made the newspapers.”

“Once I proved myself, things calmed down.  The only other time that I faced some real discrimination other than rude comments, was not because of my being a woman, it was because being at the bottom of the board meant I had no choice
over who I ran with and ended up running with an African American driver.  Didn’t bother me, I am not a racist, he was an excellent driver, but when we stopped in at a diner to eat supper, we were not welcome.”  Carol said.

Carol has pulled vans and reefers also, but returns to tankers. “The pay is very good and for the most part, you get paid for what you do, every company being a little different,” she said, “you get excellent benefits usually and are more often home every week than in the other types of trailers.  You can have a life.”

In Carol’s opinion, flammable gases and products are more dangerous than other types of chemical/hazmat loads.  “Vapors from flammable chemical loads come down and settle at ground levels because the dome is open to unload,”  she said. “One day, I was delivering a load of flammable product.  I had out warning signs to keep people away.  The workers at the plant came outside on break and lit up their cigarettes within 10 feet of my rig ignoring the signs and me!  It could have been very nasty; we all could have been hurt!  I rushed around trying to them to move back and finally had to send for the plant manager to get them to move away.  That was probably the closest I came to be afraid while pulling hazmat.”

Pulling chemical tanker is not a glamorous job.  A driver has to wear safety gear beyond a hard hat depending on what the commodity or company policy is.  “Full PPE (personal protection equipment) is now mandatory at my company no
matter what we are hauling.  That means that I have to wear hard hat, full plastic/rubber boots and coveralls, gloves, face mask and at times a respirator.” Carol relates.

A story that Carol laughs about now, at the time was not so funny to her.  “I was pulling a load of latex, non hazmat, and a pressure fitting let loose covering me with white latex.  Here I was covered with latex.  I got upset and called the boss and all he could do was laugh at me.  He teased me saying I must look like a prophylactic which just made the whole thing worse at the time!”

There is some physical work involved in pulling a tanker.  It takes about an hour to load, but can take up to five hours pending on commodity to unload.   A driver will have to climb to the top of their tank, pull hoses in and out and connect them to fittings and place buckets under each connection in case of a leak. Carol laughed, “A good day is when the buckets stay empty,”

The knowledge of hazmat regulations is tantamount in pulling chemical tanker.  There are more things to check doing a pre-trip inspection and having to stop at railroad crossings is just one of the intensified safety issues faced by the driver and enforced by the DOT.  Hazmat haulers are pulled in for inspections more than other types of truckers.  “We have to have documentation of what we just hauled and even if we are under a brand new trailer that has never had a load in it, we have to have documentation to prove it,” Carol said.

After 35 years of driving and 4+ million miles, Carol is still driving truck and taking pleasure in pulling her tankers.  She recommends women get into trucking and specifically tanker pulling.  “It has been good to me in many ways; I make a good living while still having a life.  Driving of course is hard on relationships and health for both genders but with proper care, many of the pitfalls can be avoided.  If you decide to pull chemical tankers, don’t get in a hurry or try to take shortcuts, safety is the biggest issue.”

You will be missed Carol for sure...toot toot!!
Proudly powered by Weebly